On Sunday, Sept. 27, the MIT triathlon team finished the 2015 Northeast Collegiate Conference Season with the Olympic-distance Westchester Triathlon in Rye, New York. Over 130 collegiate athletes from the region competed in the three-sport race: the 0.9-mile swim, 25-mile bike, and 6.2-mile run. 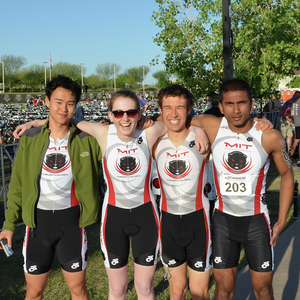 On Saturday, April 13, four MIT triathlon club athletes competed in the USAT Collegiate National Championship in Tempe, Arizona. The event was like none other — there were over 1000 athletes from 108 schools from around the country who were excited, nervous, and exhilarated all at the same time. For the MIT club, most races occur during the summer and fall against other northeast collegiate teams, so an early-season April race was a great way to kick off the local season.

The MIT Triathlon Team returned from Buzzard’s Bay Sprint Triathlon on Sept. 16 after an incredible performance. The team raced in the ¼ mile swim, 14.7 mile bike, 3.1 mile run triathlon as part of the Northeast Collegiate Triathlon Conference (NECTC) competitive season. For the second week in a row, the MIT Triathlon men placed first among collegiate competitors. The women performed solidly with a fifth place finish. The team sent 24 athletes to this race, which emphasizes the huge growth in MIT Triathlon and triathlon as a sport in general; in 2009, only four members attended the average race.