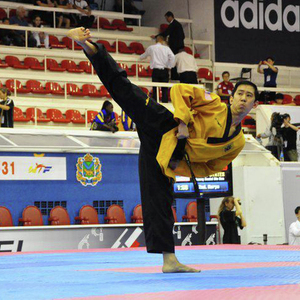 This summer, several members and instructors of the MIT Sport Taekwondo club represented the United States as part of the national team at two major competitions: the World Taekwondo Poomsae Championships and the World University Games. The club members were competing in the Taekwondo discipline of poomsae, a series of choreographed moves that require power, balance, and flexibility. Poomsae is judged much in the same way that gymnastics or figure skating is scored, according to both accuracy and interpretation.