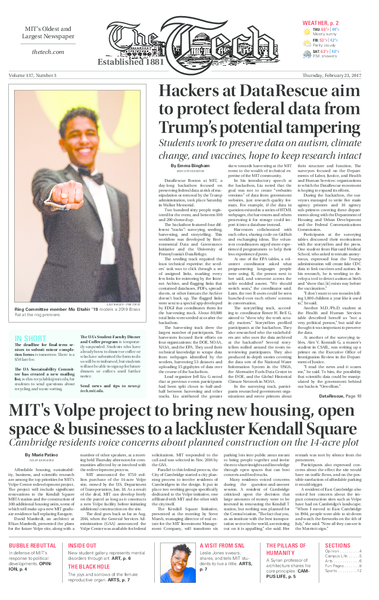 Affordable housing, sustainability, business, and scientific research are among the top priorities for MIT’s Volpe Center redevelopment project. The project will include significant renovations to the Kendall Square MBTA station and the construction of 300 additional housing units, some of which will make up a new MIT graduate residence hall, replacing Eastgate.

President Donald Trump on Wednesday rescinded protections for transgender students that had allowed them to use bathrooms corresponding with their gender identity, overruling his own education secretary and placing his administration firmly in the middle of the culture wars that many Republicans have tried to leave behind.

DataRescue Boston at MIT, a day-long hackathon focused on preserving federal data at risk of manipulation or removal by the Trump administration, took place Saturday in Walker Memorial.

Today’s temperatures will be more than 20°F (11 K) warmer than normal for this time of year, as winter meets its premature demise in much of the United States. It has been a week since the high temperature observed at Boston’s Logan Airport was colder than its climatological normal, and today’s warm weather would be more suited for mid-May than for late February. This anomalous warmth is part of a pattern that has generated springlike weather over the East and the South, causing temperature records to be broken at many sites in those regions. Anomalously warm weather is forecast to continue for at least two more weeks east of a line running roughly from Texas to Wisconsin. With the first day of astronomical spring less than a month away, the prospect of a return to winter is becoming increasingly unlikely.

The deadline for final-term seniors to submit minor completion forms is tomorrow. There is a $50 late fee.

Instead of retreating into the comfort of their bubbles, people are taking action. They have realized that although Trump may be the nominal leader of the country, he is not their leader.

The Open Mind :: Open Art exhibit, which opened on Feb. 16, seeks to “celebrate neurodiversity” - and acknowledge various states of the mind, including depression, anxiety, and other mental disorders.

You might recognize Leslie Jones’s name from Ghostbusters (2016), where she starred as Patty Tolan. You might know her from Saturday Night Live, which she joined in 2013. On Sunday night, Leslie Jones performed for a packed house in Kresge.

Jelly and George brings two composers together for one evening

Two guys walk into a bar. They might even be frenemies, as pianist Aaron Diehl joked to the audience, but they would have something in common—jazz-imbued music. If Ferdinand “Jelly Roll” Morton and George Gershwin had met in history, the result would be spectacular.

The Engineers continue to enjoy a spectacular month

Men’s Volleyball (15-3) went undefeated this week with four wins over Emerson College, Kean University, Elms College, and John Jay College. The Engineers didn’t lose a single set, going 3-0 in all of their matches. 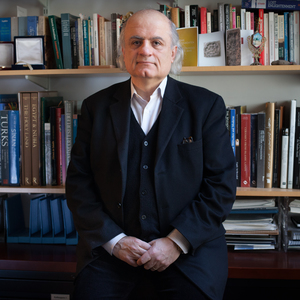 I have spent more than half of my life at MIT. Having studied architecture in my native Damascus, Syria, I came to the U.S. to specialize in passive solar energy at UCLA in Los Angeles.

Nasser Rabbat, the Aga Khan Professor in the Department of Architecture.
Photo courtesy of Daniel Jackson.
All Photos From Issue