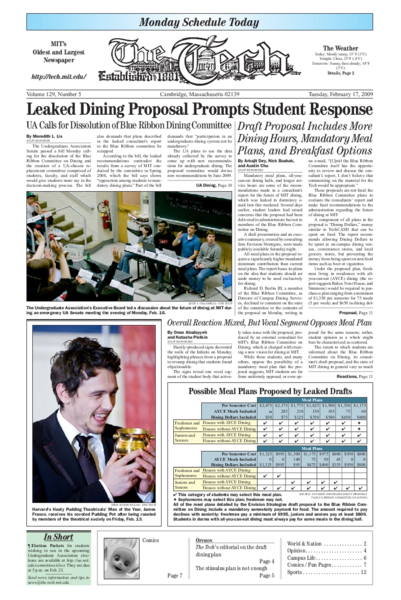 Mandatory meal plans, all-you-can-eat dining halls, and longer service hours are some of the recommendations made in a consultant’s report for the future of MIT dining, which was leaked to dormitory e-mail lists this weekend. Several days earlier, student leaders had raised concerns that the proposal had been delivered to administrators but not to members of the Blue Ribbon Committee on Dining. 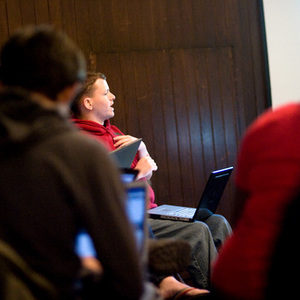 Hastily-produced signs decorated the walls of the Infinite on Monday, highlighting phrases from a proposal to revamp dining that students found objectionable.

Text of Letter to Guest Columnist

The below letter was sent as an e-mail to Gila Fakterman, one of two authors of the Jan. 28, 2009 opinion column “Expecting More from an MIT Professor: How Prof. Chomsky’s Talk Failed the Community.” 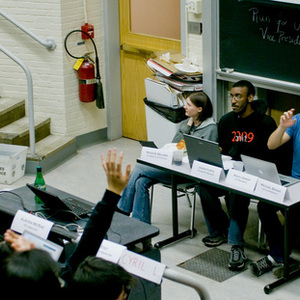 The Undergraduate Association Senate passed a bill Monday calling for the dissolution of the Blue Ribbon Committee on Dining and the creation of a UA-chosen replacement committee comprised of students, faculty, and staff which would give students more say in the decision-making process. The bill also demands that plans described in the leaked consultant’s report to the Blue Ribbon committee be scrapped.

As Hillary Rodham Clinton arrived in Japan on Monday, her first foreign visit as secretary of state, North Korea threatened to test what its neighbors believe is a ballistic missile capable of reaching the United States.

Revelations by Senator from Illinois Cause Concern

Several Democratic lawmakers from Illinois said Monday that they were troubled by revelations about Roland W. Burris, the state’s newest senator and a fellow Democrat. And at least one called for Burris to come before the state Legislature and explain himself.

Close on the heels of the pope’s rehabilitation of a group of schismatic bishops, including one who denied the Holocaust, a second scandal has compounded a searching debate within the church over whether Pope Benedict XVI’s focus on doctrine and perceived insensitivity to political tone are alienating mainstream Catholics and undermining the church’s moral authority.

The U.S. Justice Department’s ethics office is in the final stages of a report that sharply criticizes Bush administration lawyers who wrote legal opinions justifying waterboarding and other harsh interrogation methods, according to department and congressional officials.

Although the Western Conference may have bested the Eastern Conference in Sunday’s NBA All Star Game, the weather bragging rights are clearly in the East. It didn’t seem possible, but much of the ice and snow that fell in the prior month has vanished in recent days. Although temperatures haven’t been far from the climatological average, daily high temperatures have consistently climbed above freezing. This, combined with a few bouts of rain in lieu of additional snow storms, has laid waste to the deep snow pack Mother Nature had built up last month. However, we’re still in the depths of winter and the risk of snow returning spontaneously is still in the cards. Thankfully, this week does not feature a return to the ice cavern of January.

The fireball that streaked across the Texas sky and appeared to dive toward earth over the weekend remained a mystery on Monday after the military said the event had nothing to do with a collision of satellites last week and did not seem to involve an artificial satellite coming down.

In a freak accident, two submarines carrying nuclear weapons, one French and the other British, collided while submerged on operational patrols in the Atlantic earlier this month, the British and French defense ministries said Monday.

First on Cambodia’s Docket: A Man Linked to 14,000 Killings

The first trial of a senior Khmer Rouge cadre opened Tuesday, 30 years after the end of the brutal communist regime that took the lives of as much as one fourth of Cambodia’s population.

Meal Plan Not What Students Ordered

We call on students and administrators alike to reject the plans for MIT’s dining system described in the recently leaked draft consultants’ report to the Blue Ribbon Committee on Dining. The report emphasizes “nutrition,” “social engagement,” and “community building” as core principles at the expense of personal responsibility, independence, and free will.

MIT offers great flexibility with its dining plan. Many other schools around the country force students to buy into a dining plan that could feed a family of four for six months. Whatever money the student does not spend on food is lost. At MIT, we instead boast a “pay as you go system” that gives students more dining options.

Only 12 months ago oil was racing past $100 a barrel, and it seemed like our nation’s ability to address our energy future would become the defining issue for our times. It might be tempting to dismiss talk of our energy challenge as just another fad born out of those crazy subprime mortgage days. After all, gasoline prices have come down, and how can we worry too much about the environment when millions of Americans have just lost their jobs? Nonetheless, there are three key reasons why energy remains an urgent issue and critical to our future.

The article entitled “Chomsky Condemns U.S. and Israel for Civilian Deaths in Gaza Strip” in the Jan. 14 issue of <i>The Tech</i> misquoted Professor Noam A. Chomsky as saying, regarding Israeli actions in Gaza, “At most they should be greeted with a yawn.” He actually said, “So there is no particular reason why this new crime should be greeted with anything more than a yawn.”

By any measure, the $787 billion stimulus bill will fall well short of solving the problems facing the economy. Over the next two years, the expected shortfall between potential and actual gross domestic product is projected to reach $2 trillion — this legislation doesn’t even come to half of that.

We are writing to express our deep concern about an email that members of our Community received in response to their recent letter appearing in <i>The Tech</i> on January 28, 2009. This email was written to the letter’s authors who were critical of positions taken by Professor Noam Chomsky his public lecture on January 13, 2009 about the recent violence in Gaza. 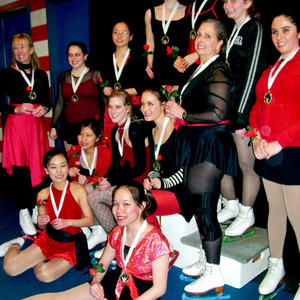 Those who know me well will know that it is impossible for me to be only vaguely interested in something. The moment I get excited about anything; be it a video game, television show, movie, or music group; I go directly into “fanboy mode.” I become almost unhealthily obsessed, becoming as fervent a fan as is physically possible, short of getting logos tattooed on my face. I quote from film and television constantly. I annoy all of my friends, trying to convert them to whatever new cause I’ve adopted. I create relevant costumes for Halloween parties and, in a recent and potentially unsettling development, conventions.

The MIT figure skating team is seen on Feb. 14 at the Skating Club of New York.
Courtesy of the Figure Skating Team

The Undergraduate Association’s Executive Board led a discussion about the future of dining at MIT during an emergency UA Senate meeting the evening of Monday, Feb. 16.
Seth A. vILLARREAL—The Tech

Paul Baranay ’11 participates in a meeting on Sunday in Burton-Conner’s Porter Room to discuss the leaked consultants’ report on dining. The meeting was hosted by the Campaign for Students.
Eric d. sCHMIEDL—The Tech 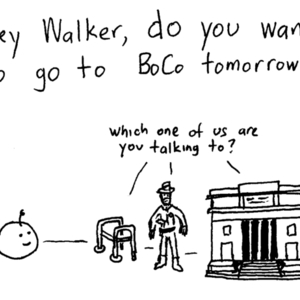 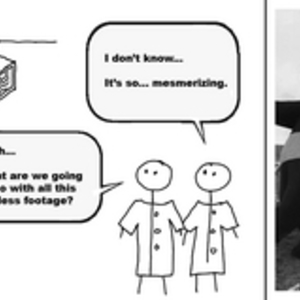 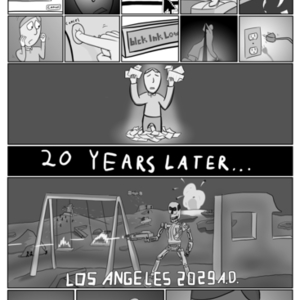 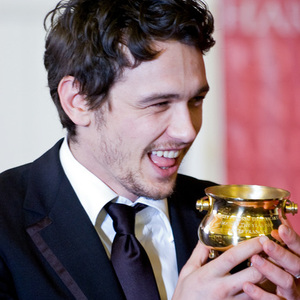 Harvard’s Hasty Pudding Theatricals’ Man of the Year, James Franco, receives his coveted Pudding Pot after being roasted by members of the theatrical society on Friday, Feb. 13.
vIBIN kUNDUKULAM—The Tech 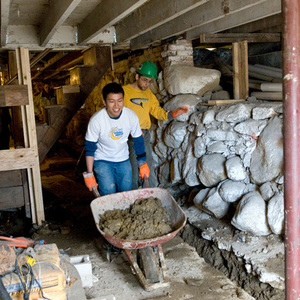 Marcel P. Nunez ’11 (back) of MIT’s Habitat for Humanity chapter works with a volunteer from the Greater Lowell chapter to remove mud and stone from the basement of a 150-year-old farmhouse in Bedford, MA. MIT’s chapt...
Chelsea Grimm—The Tech
All Photos From Issue