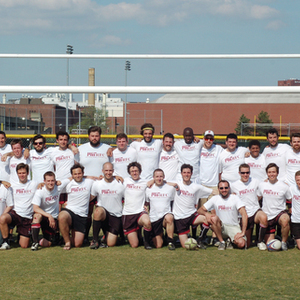 You don’t often hear rugby associated with MIT, but for the 30 players on the MIT Men’s Rugby team, it’s something that brings them together. Started in 1949, the club is one of the oldest in Boston and the founding core of Boston’s Super League club. A mixture of different countries, languages, and styles of play, the team has pulled together, seeking to play at their top level at all times. For the past four months, men’s rugby has been practicing and preparing to defend the Division III NERFU (New England Rugby Football Union) Cup. Whether playing in snow, sleet, or sun, the team knows that this is their chance to retain their championship and prove that they can play Division II rugby.