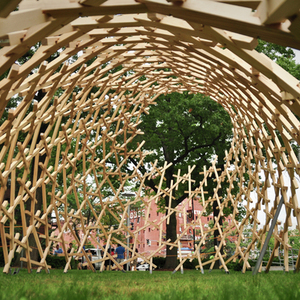 This is the second of a two-part Q&amp;A series spotlighting two campus pavilion projects designed and built by MIT Master of Architecture students. 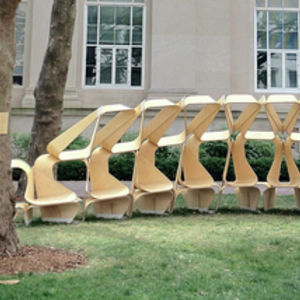 The Kerf Pavilion, unveiled near the Green Building in the beginning of July, has piqued many curious minds on campus. Here, team members Tyler Crain, Brian Hoffer, Chris Mackey, and Dave Miranowski discuss the significance and motivations of their project. 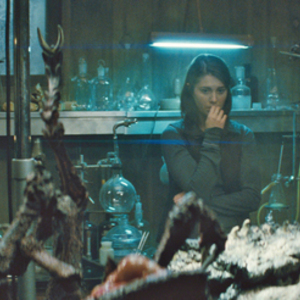 MOVIE REVIEW The Thing is …

In the 2011 prequel to the 1982 John Carpenter film of the same name, paleontologist Kate Lloyd (Mary Elizabeth Winstead) is called to Antartica for what could be the discovery of the century: an alien ship buried deep in the ice and a frozen organism that seems to have died when the ship hit Earth. Kate and her Norwegian colleagues perform experiments on the organism in the name of science but, to their utter horror, unleash an alien nightmare; this “Thing” engulfs and transforms into anything it touches. So here we have a bunch of Scandinavians and righteous Kate isolated in a cluster of wooden cabins in Antarctica, each of them vulnerable to becoming the Thing. That’s essentially the entire plot — now how do I begin to discuss The Thing?

Emma and Dexter met for the first time — officially — on the day of their college graduation and got together that night. Almost. They separated the next morning, but their lives were intertwined for the next twenty years. Starring Anne Hathaway as Emma Morley and Jim Sturgess as Dexter Mayhew, One Day is a film adaptation of the New York Times bestseller of the same title by British writer David Nicholls.

INTERVIEW How much do you really know about your roommate?

How much does he or she know about you? Relationships between two people who know each other tend to become fragile and volatile when they begin living together. What happens when you have to live with a complete stranger in the strange new land that is college? Suddenly everything is a crapshoot. In theatres nationwide today, The Roommate explores the budding relationship between two strangers, including one who happens to cross the line.

“Cartel,” <i>noun</i>, is just another word for a trust, a coalition and in some ways, a monopoly. A cartel is also what former Bloomberg Television reporter Bob Bowdon labels the American education system. Given the United States’ persistent anti-trust efforts, shouldn’t they have already scrutinized and addressed this increasingly out-of-control industry? Perhaps the problem is that few actually know about all the messy politics entangled with our schools. In Bowdon’s 90-minute rapid-fire documentary, he makes sure that his audience understands that in addition to health care and the economy, there is another crisis in this country.

EXHIBIT REVIEW ‘Acting Out’ Is Raw and Humanizing

Video has become a trendy form of art. For one, seemingly ridiculous YouTube productions can silently generate millions of views, transforming the meaning of “expression” and “reality” along the way. And now, five artists from around the world confront this hot new medium by using it as an apparatus to study human interactions and cultural inclinations. The product of their combined efforts is <i>Acting Out</i>, a collection of social experiments captured on video and filtered through an artistic lens. It’s now playing on the fourth floor of Boston’s Institute of Contemporary Art (ICA).