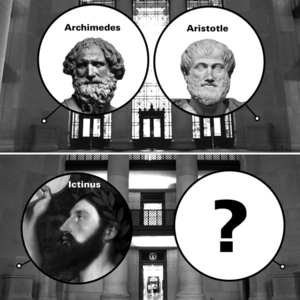 The empty plinths in Lobby 7 are familiar to anyone who passes through the entrance to MIT’s campus on a regular basis. Originally designed to hold statues depicting the ancient Greek intellectuals Aristotle, Ictinus, Archimedes, and Callicrates, they are commonly adorned today with a rather unique piece of artwork: MIT students. The Lobby 7 Design Competition, which kicked off last May, aims to fill the empty spaces with more appropriate adornment. After reviewing the 60 student-submitted entries in December, the competition announced its twelve finalists two weeks ago. The competition has separate divisions for undergraduate and graduate student entries, and the finalists were evenly split between these divisions.

Drawn from an elite club

The selection of Xerox CEO Ursula M. Burns as commencement speaker marks the fourth time in five years that MIT has chosen a member of the MIT Corporation, raising the question: How are final speakers are chosen?

The parents of deceased MIT student Robert M. Wells ’08 sued MIT and the Delta Upsilon fraternity on May 21, 2010, alleging 26 counts of wrongful death.

Is MIT really going to increase the undergraduate class size? MIT isn’t sure when or how much, but some sort of increase looks likely.