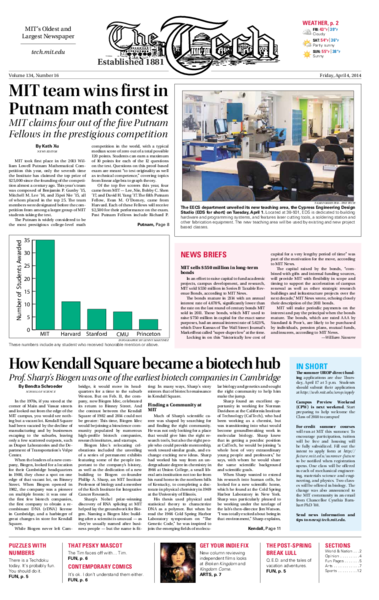 To clarify a Tuesday, April 1 article about the election of the Sharma/Ndengeyingoma ticket to the UA presidency/vice presidency, while Sharma was quoted saying she wanted to re-establish presidential summits in the style of former P/VP Craighead/Walsh, current UA president Sidhanth Rao said in an email to The Tech that similar summits did occur this semester, but did not occur during the Fall 2013 semester. 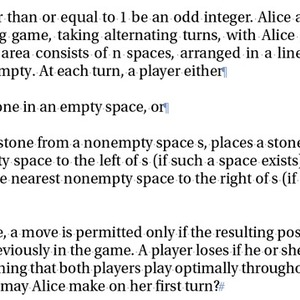 MIT took first place in the 2013 William Lowell Putnam Mathematical Competition this year, only the seventh time the Institute has claimed the top prize of $25,000 since the founding of the competition almost a century ago. This year’s team was composed of Benjamin P. Gunby ’15, Mitchell M. Lee ’16, and Zipei Nie ’15, all of whom placed in the top 25. The team members were designated before the competition from among a larger group of MIT students taking the test.

In the 1970s, if you stood at the corner of Main and Vassar streets and looked out from the edge of the MIT campus, you would see nothing but a vacant lot. Kendall Square had been vacated by the decline of manufacturing and by businesses escaping to the suburbs, leaving only a few scattered outposts, such as Draper Laboratories and the Department of Transportation’s Volpe Center.

In an effort to raise capital to fund academic projects, campus development, and research, MIT sold $550 million in Series B Taxable Revenue Bonds, according to MIT News.

The summer UROP direct funding applications are due Thursday, April 17 at 5 p.m. Students should submit their application at http://web.mit.edu/urop/apply

Federal health regulators approved a drug overdose treatment device Thursday that experts say will provide a powerful, life-saving tool in the midst of a surging epidemic of prescription drug abuse. Similar to an EpiPen used to stop allergic reactions to bee stings, the easy-to-use injector — small enough to tuck into a pocket or a medicine cabinet — will be prescribed for emergency use by the relatives or friends of people who have overdosed.

KILLEEN, Texas — In the aftermath of a deadly rampage at Fort Hood here in November 2009 that left 13 people dead, Defense Secretary Robert M. Gates announced a Pentagon review of the shooting to help ensure, he said, that “‘nothing like this ever happens again.”

WASHINGTON — The Obama administration acknowledged Thursday that it had attempted, and failed, to build a Twitter-like social media site in Cuba but insisted that it was part of the Agency for International Development’s effort to encourage political discussions, not a covert program to overthrow the government.

A little more than a week after becoming chief executive of Mozilla Corp., Brendan Eich is stepping down after an intense debate over his belief that same-sex couples should not be allowed to marry.

Two women kidnapped from a resort in Malaysia

KUALA LUMPUR, Malaysia — Gunmen kidnapped a Chinese tourist and a Filipino hotel worker, both women, from a beach resort on an island off the coast of Malaysian Borneo, the Chinese and Malaysian authorities said Thursday, spurring an international manhunt.

Nest Labs, the home automation company recently acquired by Google for $3.2 billion, said Thursday that it was halting sales of its smoke and carbon monoxide detector over safety concerns.

April showers, then a return to sunny skies

Spring has finally made an appearance the last few days thanks to a high pressure taking control of the region Tuesday through Thursday, bringing dry weather and spring-like daily high temperatures in the upper 40s to low 50s°F. Today marks a brief change in this pattern as a low pressure system tracks up from the middle Mississippi River Valley and brings rain to our region overnight tonight. Expect a cooler high temperature of 43°F today due to easterly winds and increasing cloud cover ahead of the low. Tomorrow, we’ll see a return to seasonable conditions as the low pressure moves out and another high pressure settles in to take its place (although a chance of showers remains tomorrow morning as the low exits the region). Expect a pleasant weekend with partly sunny to sunny skies and daily highs in the low to mid 50s°F.

A conversation with John Lyons Murphy

The Tech interviewed John Lyons Murphy, producer of Broken Kingdom and Kingdom Come. Murphy spoke about his experiences with both films, as well as his thoughts on independent film as a whole. 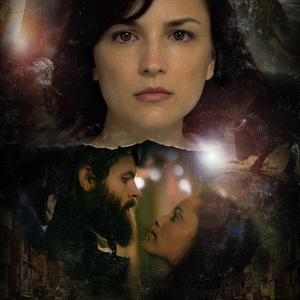 Earlier this March, the independent film Broken Kingdom was released on iTunes. The film caught my eye because it was written and directed by one of my favorite actors, Daniel Gillies, who also stars in the film. The movie itself was fascinating — the story builds around two separate narratives, leaving the audience to wonder if these narratives connect. One follows a spiritually lost and self-loathing American writer and a poor teenage girl in the slums of Bogota, Colombia, while the other portrays the life of a Hollywood-based daycare teacher who suffers because she hides a tragic secret.

After consecutive rainy days and canceled games, the MIT softball team finally opened New England Women’s and Men’s Athletic Conference (NEWMAC) play on Tuesday, facing Smith College in a double header on the road. Tech lost the first game 3-2 in eight innings after going to a tie breaker, but held on to an early lead in the second game to take a 6-4 victory over the Pioneers. The Engineers are now 4-8 and 1-1 in NEWMAC play, while Smith is 8-3 and 2-2 in league action. 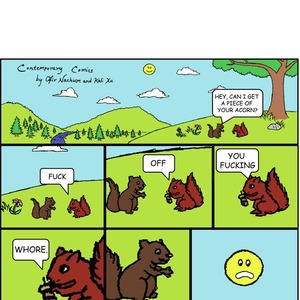 Film poster for the independent movie Broken Kingdom.
Courtesy of the disposables llc 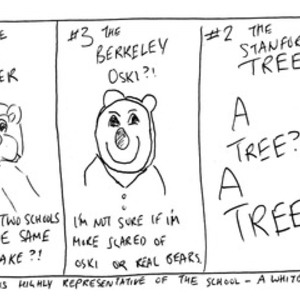 This was the last question, problem B6, on the 2013 William Lowell Putnam Mathematical Competition. None of the over 4000 students who wrote the exam succeeded in solving the problem. 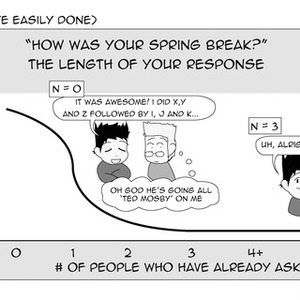 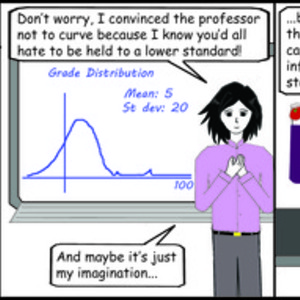 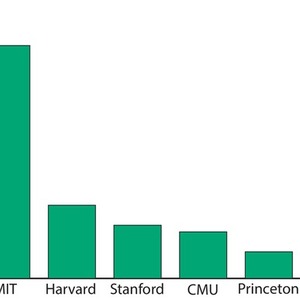 These numbers include any student who received honorable mention or above.
infographic by lenny Martinez 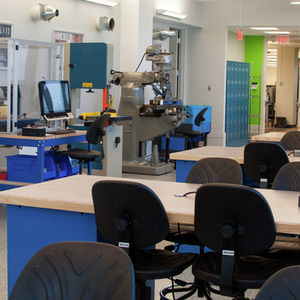 The EECS department unveiled its new teaching area, the Cypress Engineering Design Studio (EDS for short) on Tuesday, April 1. Located at 38-501, EDS is dedicated to building hardware and programming systems, and feat...
Tami Forrester—The Tech
All Photos From Issue