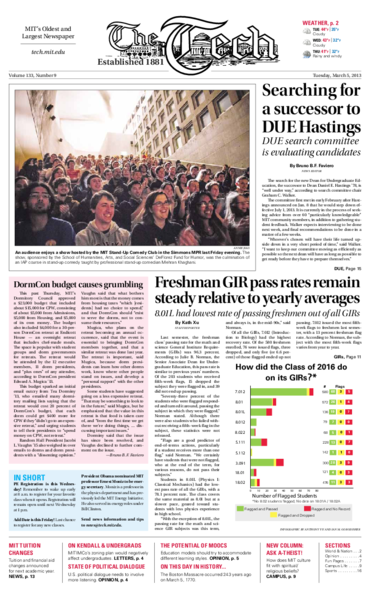 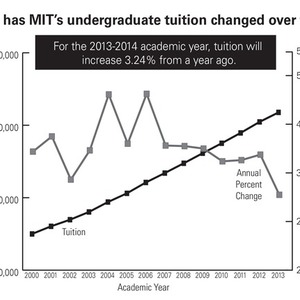 MIT’s undergraduate tuition will increase by 3.24 percent for the upcoming academic year (2013-2014), according to an announcement made by the MIT Corporation last Friday.

This past Thursday, MIT’s Dormitory Council approved a $23,000 budget that included about $15,000 for CPW, consisting of about $5,000 from Admissions, $5,000 from Housing, and $5,000 of its own money. The budget also included $4,000 for a 30-person DormCon retreat at Endicott House — an overnight retreat that includes chef-made meals. The space is popular with student groups and dorm governments for retreats. The retreat would be attended by the 12 executive members, 11 dorm presidents, and “plus ones” of any attendee, according to DormCon president Edward A. Mugica ’13. 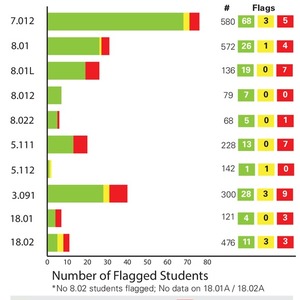 Last semester, the freshman class’ passing rate for the math and science General Institute Requirements (GIRs) was 96.3 percent. According to Julie B. Norman, the Senior Associate Dean for Undergraduate Education, this pass rate is similar to previous years’ numbers. Of the 203 students who received fifth-week flags, 15 dropped the subject they were flagged in, and 39 did not end up passing.

WASHINGTON — As the nation’s top Democrat, President Barack Obama has a clear imperative: to ratchet up pressure on Republicans for across-the-board spending cuts by using the power of his office to dramatize the impact on families, businesses and the military.

Searching for a successor to DUE Hastings

The search for the new Dean for Undergraduate Education, the successor to Dean Daniel E. Hastings ’78, is “well under way,” according to search committee chair Graham C. Walker.

PE Registration is this Wednesday! Remember to wake up early at 8 a.m. to register for your favorite class when it opens. Registration will remain open until next Wednesday at 1 p.m.

The rate of Caesarean deliveries, the most common operating-room procedure performed in the United States, varies dramatically among hospitals across the country, a new study has found, ranging from seven

Supreme Court justices worry about a flood of cases

WASHINGTON — February was flood season at the Supreme Court.

Doctors announced Sunday that a baby had been cured of an HIV infection for the first time, a startling development that could change how infected newborns are treated and sharply reduce the number of children living with the virus that causes AIDS.

LONDON — When Poland and seven other formerly Communist nations joined the European Union in 2004, Britain threw open its jobs market earlier than required to welcome tens, even hundreds, of thousands of new workers born behind the Iron Curtain.

LONDON — HSBC, Britain’s biggest bank, said Monday that its net profit fell 17 percent last year because of a record fine to settle money laundering charges and changes related to the value of its debt.

BAGHDAD, Iraq — More than 40 Syrian soldiers who had sought temporary safety in Iraq from rebel fighters along the border were killed Monday in an attack by unidentified gunmen as the Iraqi military was transporting the soldiers back to Syria in a bus convoy, the government said. At least seven Iraqis were also reported killed in the attack, which appeared to be the most serious spillover of violence into Iraq since the Syrian conflict began two years ago.

NOAA and FEMA mark National Severe Weather Preparedness Week from March 3 to March 9. Prepare an emergency supply kit, sign up for severe weather alerts, and share warnings and plans with your peers; it could save your life! Primary threats in Massachusetts include floods, severe thunderstorms, blizzards, hurricanes, and tornadoes. For more information, visit the National Weather Service website.

The Corporation’s plans for Kendall would harm the undergraduate experience

A restaurant review in last Friday’s issue on Atomic Bean Café neglected to list the café’s weekend hours. In addition to weekdays 7 a.m. – 7 p.m., it is also open on weekends 8 a.m. – 6 p.m.

The unquestioned assumption of online education

Online education is growing rapidly. Recently, six new universities have been added to the edX platform. Each new university plans to develop its own set of MOOCs (Massive Open Online Courses). Between the big three — edX, Coursera, and Udacity — there are now hundreds of MOOCs from universities all over the world. Advocates are quick to highlight that these MOOCs have already served millions of students, enabling anyone with an Internet connection to receive a world-class education.

We could be so much more

On Saturday, the government enacted a set of across-the-board spending cuts known as “the sequester.” These cuts, painful for both parties, were created by Congress last year to motivate a compromise on deficit reduction.

No. 24 ranked MIT men’s basketball fell in the first round of the NCAA tournament to No. 14 St. Mary’s College last Saturday night, 85-76. In his final game as an Engineer, William Tashman ’13 scored 23 points, leading the team in scoring. After an incredibly competitive first half, MIT went into the break with a 36-35 lead. They continued to hold the lead for the majority of the second half, and they held a 63-56 lead with 8:48 remaining in the game. St. Mary’s went on a 12-0 run afterwards, however, and never relinquished the lead. Although the Engineers finished with a higher shooting percentage, turnovers proved to be their demise, as they gave up the ball 11 times compared to St. Mary’s 6.

“Uh-oh uh-oh, Rose came down bad on his left foot. See him? Holding on to his knee … holding on to his knee… and DOWN.” This was the voice of play-by-play announcer Kevin Harlan on TNT during game 1 of the first round of the 2012 NBA Playoffs as Chicago Bulls all-star point guard Derrick Rose, arguably the most explosive player in the NBA, suffered an injury that would keep him out of basketball for over six months. At this point in the game, the Bulls were up by twelve with less than two minutes left in the fourth quarter, and many Bulls fans were wondering why Rose was still on the floor. After watching Rose land awkwardly and tear his left knee’s anterior cruciate ligament (ACL) on a meaningless play, Bulls head coach Tom Thibodeau must have regretted his decision to keep Rose in the game after the Bulls had already sealed the victory. Although the Bulls won this game, they lost the best-of-seven series to the lower-seeded Philadelphia 76ers in six games. More importantly, the Bulls were going to miss their leader and superstar, Derrick Rose.

Ask A-thiest is a new column by Aaron Scheinberg, an atheist, and Stephanie Lam, a Christian, which uses contrasting worldviews to explore questions and misconceptions about philosophy and religion. Send us the burning questions you have always wanted answered by an atheist or Christian (or both), and Aaron or Stephanie will tackle them! 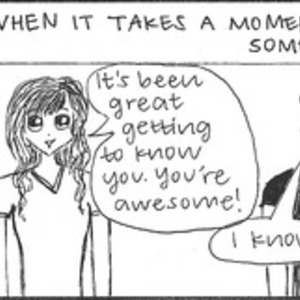 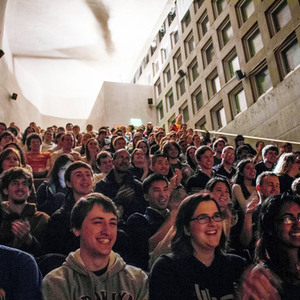 An audience enjoys a show hosted by the MIT Stand-Up Comedy Club in the Simmons MPR last Friday evening. The show, sponsored by the School of Humanities, Arts, and Social Sciences’ DeFlorez Fund for Humor, was the cul...
Annie Jiao
All Photos From Issue