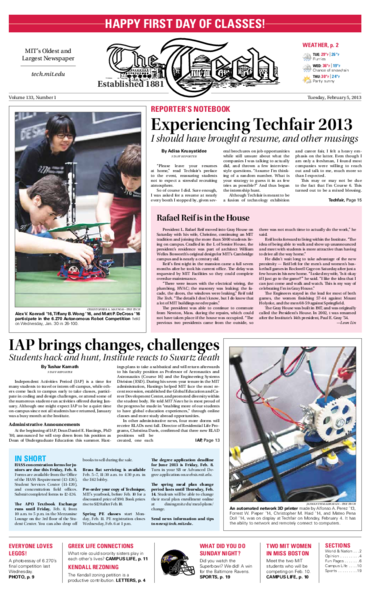 A major snowstorm is expected to hit MIT tomorrow, as winter storm Nemo makes its way across the coast. MIT has announced that they will be closed on Friday ; Massachusetts Governor Deval Patrick has declared a state of emergency that will be effective on Friday starting at noon. Community members should check emergency.mit.edu for the most up to date information. The Tech will update this page throughout the night as we learn more.

Tonight marks the opening of the Lobby 10 installation from the Martin Luther King Jr. Design Seminar (17.920), an IAP course where students learned about the Civil Rights Movement and discussed topics like race and identity. The installation will be up until the night of Jan. 14.

HASS concentration forms for juniors are due this Friday, Feb. 8. Forms are available from the Office of the HASS Requirement (12-126), Student Services Center (11-120), and concentration field offices. Submit completed forms to 12-126.

Have you ever wanted to design a website, battle robots, or see who can write the smartest code? MIT students engaged in these activities through several competitions during IAP, most notably 6.270, 6.370, and 6.470. Last week, the winners to these student-run competitions were announced.

US accuses S&P of fraud in suit on loan bundles

The Justice Department late Monday filed civil fraud charges against the nation’s largest credit-ratings agency, Standard &amp; Poor’s, accusing the firm of inflating the ratings of mortgage investments and setting them up for a crash when the financial crisis struck. 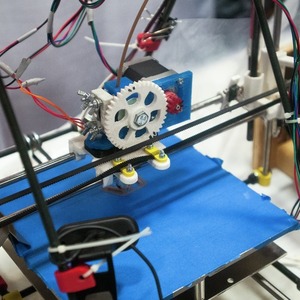 “Please leave your resumes at home,” read Techfair’s preface to the event, reassuring students not to expect a stressful recruiting atmosphere.

Independent Activities Period (IAP) is a time for many students to travel or intern off-campus, while others come back to campus early to take classes, participate in coding and design challenges, or attend some of the numerous student-run activities offered during January. Although one might expect IAP to be a quiet time on-campus since not all students have returned, January was a busy month at the Institute.

CBS came close to matching the audience levels of the two most-watched television events of all time Sunday night, turning an electrical failure in the New Orleans Superdome into a likely ratings advantage for its coverage of Super Bowl XLVII.

Rafael Reif is in the House

President L. Rafael Reif moved into Gray House on Saturday with his wife, Christine, continuing an MIT tradition and joining the more than 5000 students living on campus. Cradled in the L of Senior House, the president’s residence was part of architect William Welles Bosworth’s original design for MIT’s Cambridge campus and is nearly a century old.

The Tech focused more of its efforts on digital innovation and data journalism in 2012 with the creation of a new Online Media team focused on developing The Tech’s online presence using multimedia, social media, and interactives. Beginning with the religion project, we produced a series of videos and interactive graphics on religion on campus based on a schoolwide survey. At the end of spring, we covered President Reif’s inauguration using traditional print media mixed in with audio podcasts, videos, and interactive graphics. In the fall, we investigated and visualized stress at MIT based on another schoolwide survey in our “Under Pressure” project.

FRANKFURT, Germany — It was only a few years ago that some economists were arguing that Europe was “decoupling” from its long dependence on trade with the United States, and predicted that the Continent’s future lay with the so-called tiger economies of Asia.

BEIRUT — Syria’s opposition coalition gave qualified backing Monday to its leader’s surprise offer last week for a dialogue with President Bashar Assad to end the civil war, pressing him to respond definitively and even offering the added inducement that he could avoid trial if he resigned and left the country.

BANGKOK — China hosted peace talks between the Myanmar government and ethnic Kachin rebels Monday, as outside pressure grew on both sides to end the intense fighting of recent weeks.

States have varied responses to issue of gun violence

Although the debate over stemming gun violence after the massacre in Newtown, Conn., is breaking down mostly along partisan lines in the nation’s statehouses — with several Democratic governors calling for stricter gun laws as most Republicans urge tighter security or revamped mental health policies — the handful of exceptions show the political and geographical complexities of the issue.

Snow comes and goes this week

A series of relatively weak storms will skirt the Boston area this week, creating brief chances for light snowfall at various times. The first of these chances will come this morning, as a low pressure system passing to our south may spread some light flurries through southern New England. Next, another weak low will pass to our north overnight, bringing light snow or rain showers to the area through tomorrow afternoon. Finally, another weak disturbance will bring the chance of light snow or rain showers during the day on Friday.

US stepped in to halt Mexican general’s rise

As Mexico’s military staged its annual Independence Day parade in September, spectators filled the main square of Mexico City to cheer on the armed forces. Nearly 2,000 miles away in Washington, U.S. officials were also paying attention.

LONDON — On the eve of a divisive vote in Parliament on the legalization of same-sex marriage, Justin Welby, the former bishop of Durham, on Monday took over formally as the 105th archbishop of Canterbury, the spiritual head of the world’s 77 million Anglicans, saying he shares the Church of England’s opposition to marriage among people of the same gender.

MIT-Kendall zoning petition — a step in the right direction 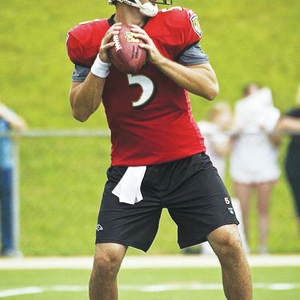 In one of the most memorable Super Bowls in recent history, the “Outage Bowl” wasn’t short on excitement. Although they had a lackluster start, the 49ers picked up intensity in the third quarter after a power outage threw half of the Mercedes-Benz Superdome into darkness. The delay lasted 34 minutes, and it was obvious that the Ravens lost a lot of their momentum during the break. With so many storylines to follow throughout the game (the Harbaugh brothers coaching against each other, Ravens’ linebacker and leader Ray Lewis playing the last game of his Hall of Fame career, San Francisco QB Colin Kaepernick leading the 49ers to the Super Bowl in his first season as a starter), this game will go down as one of the best Super Bowls in the modern era.

Have you ever met an MIT alum purely by chance? Maybe on a plane someone asked you about your cardinal and grey sweatshirt. Perhaps you found out an older neighbor once walked through the Infinite to class. We immediately connect to these MIT alumni, trading stories about late nights and tunnel escapades and comparing Brass Rats. We have shared experiences and a common history. 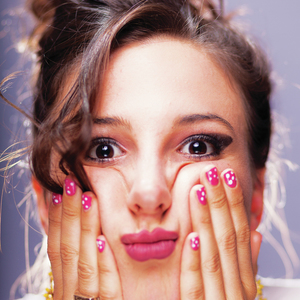 This year, two MIT students will be among the 16 contestants in the Miss Boston pageant on Feb. 10. Both Jacqueline “Chacha” Durazo ’14 and Kira S. Kopacz ’15 are a reflection of the best aspects of the Institute, passionate about their fields of study and dedicated wholly to their passions in life. Perhaps what is most striking about these women are their similar yet different perspectives on the pageant experience, how it reflects the current trends in society, and how it gives them a platform to spread their ideas and inspire others. 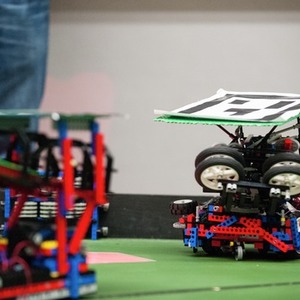 Two robots compete on the playing field. Robots could score points by performing various activities on the field.
CHRISTOPHER A. MAYNOR—The Tech 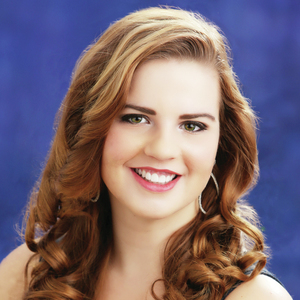 Kira S. Kopacz ’15 is a contestant for Miss Boston this year.
courtesy of Kira Kopacz

Joe Flacco, the MVP, as pictured in the 2008 training camp.
Wikimedia Commons 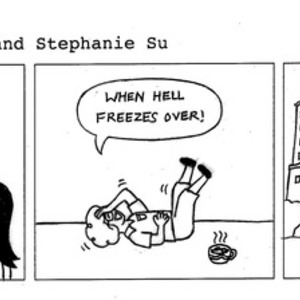 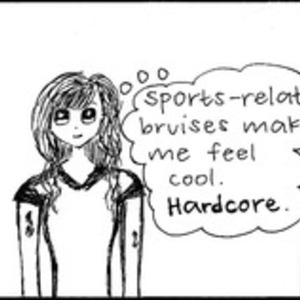 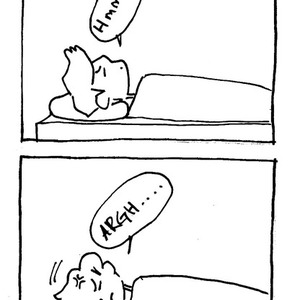 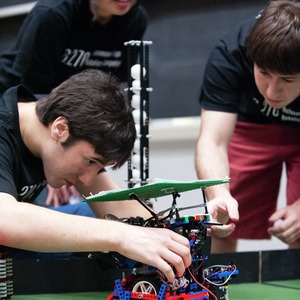 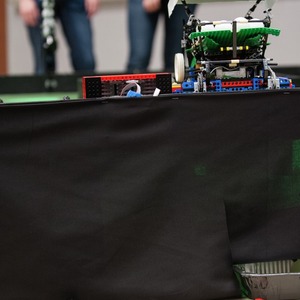 A robot loses parts during the competition.
CHRISTOPHER A. MAYNOR—The Tech 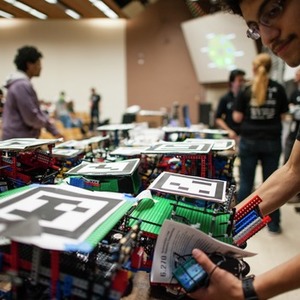 A student picks up his robot during the competition.
CHRISTOPHER A. MAYNOR—The Tech 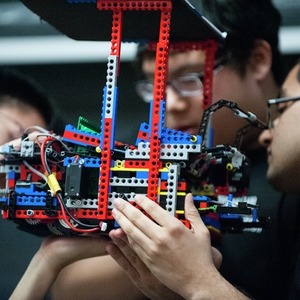 Three teammates examine their robot during the competition.
CHRISTOPHER A. MAYNOR—The Tech 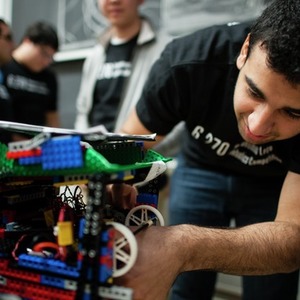 A student fixes a part on his team’s robot.
CHRISTOPHER A. MAYNOR—The Tech

An automated network 3D printer made by Alfonso A. Perez ’13, Forrest W. Pieper ’14, Christopher M. Haid ’14, and Mateo Pena Doll ’14, was on display at Techfair on Monday, February 4. It has the ability to network an...
Jaswanth Madhavan—The Tech 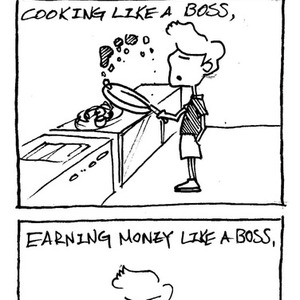 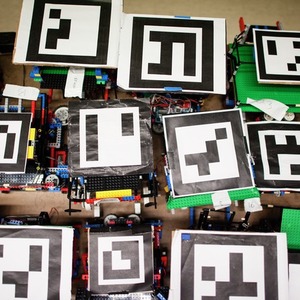 A bar-coded sheet of paper called a “vision code” was placed over each robot as part of the competition’s vision positioning system.
CHRISTOPHER A. MAYNOR—The Tech 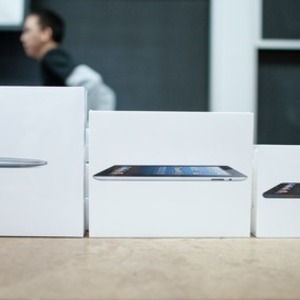